Jammer's respond to...Me saying I am the best at the summer carnival

- Check out today's returning egyptian sphinx
- Jammers react to me saying I am the best in the summer carnival
- My cougar was on pinterest?
- Make sure to check out today's mini challenge

Hey jammers!
Sorry for not posting yesterday, I was baking cookies for a school project(kinda) that were needed for tomorrow and I would not have had enough time if I did them tonight. So sorry about that. This post is actually gonna be much longer than I anticipated it to be so let's get on with the post! But before we do I almost forgot about the least popular places in jamaa Part 2, so that will hopefully get posted sometime soon! So, without further notice let's get on with the post!

Daily Item:
Today we have the returning Egyptian sphinx sold in jam mart furniture for 600 gems! 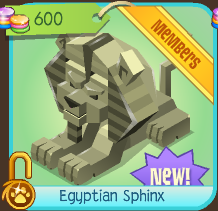 You know what I just thought guys? What if AJ put taxes on items and we would get receipts! Would that not be cool?? I think it would be!
So today I thought to see what jammers react to when I say I am the best at the summer carnival. I was originally gonna do this in the summer carnival itself but I thought, some people might even be paying attention cause they will be playing the games.

Here is what happened: 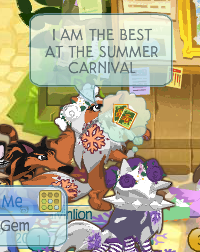 No one responded and I kept getting buddy requests from someone. I go check my den since someone was in it and that jammer was there. She said hi and asked if I was using  bubble chat after I asked if she needed anything.Then I said I was trying to do something and was able to hang out later and she said okayXD
Then someone else came...

I then realized I wasn't getting to far... So I decided to jag random jammers and see what their response was...
I think I jagged 4 people and I am still waiting on their response but someone else came to my den...
That jammer just wanted to know if I had a squirrel but when I told her I was the best at the summer canrival she said...

Then someone jagged back.

Then the jammer in my den got mad.

Then I said see ya and locked the den:P

In the end I didn't really get the reactions I wanted too, so it kinda turned out to be a fail in away but in a way it wasn't! My favourite response was "awesome!!! good job!!". I hope you guys know that I am not best at the summer carnival and actually suck at like half the gamesXD

Today when I came on AJ I got a message:

Apparently my cougar was on pinterest???? I am not sure how it got on there TBH. I was thinking maybe some one pinned a pic of it from this blog if I posted it or maybe on Scooter's blog? I tried to find it on pinterest and I couldn't. Not to say that I looked much too. I asked her where she found it and now I am just waiting on a response. I'm not entirely sure if I like it on pinterest....

Also my buddy named Fang who runs the Animal Jam Sunshine Blog, created a blog called We are jamaa. I forgot to mention it before but here is the link if you wanna join and learn more about it!
We are Jamaa
You can also learn more about it by checking it out on Fang's blog too!
Please make sure to check it out if you haven't yet!

Mini Challenge:
Today's mini challenge is fairly simple, if you are on AJ that is.
For today's mini challenge I would like you to go my den and find Box Monster's best friend juniper.
Please comment down if you find it!
(I am also well aware that my den needs to be redoneXD)

Speaking of box monster he hasn't posted in awhile. I better get him on it right after this post.