Hey jammers!
How are you all today?
Im doing okay today, I woke up at 4:30 in the morning with a small headache that didn't go awayDX So basically ive had a headache all day, though sometimes it feels like it's worser than other times throughout the day. Im happy though cause I have got no homework this week:D 5sos also announced the name of their new album this week and released a new single:) They also announced their NA part of the tour and my sister and I plan on goimg again!! The tickets are only like 50$ too which is nice!! WOO HOOO XD I also didn't do much in class today also...

Anyways, yesterday we had received a Jamaa Journal Update so let's check it out! 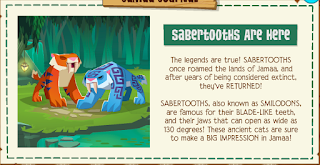 Sabertooths are now here!! Hmmm Im not really sure what my opinion is on these XD I mean they are kinda cool looking but creep me out at the same time. They aren't exactly copies of the tigers either which is nice. Ill have to do a tiger vs sabertooth post tomorrow... *implants in head to make sure I remember* (still wish they could have done another animal though) 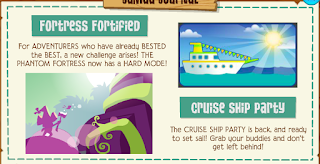 Phantom fortress now has a hard mose and the cruise ship is back. 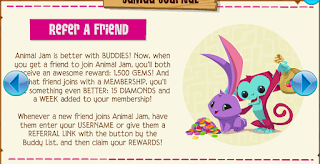 Refer a friend thing.
So basically underneath the buddy list there is a invite a buddy button thats big and looks out of place and so you click that and you can either print out a thing inviting a buddy or get code. But like how does AJHQ know you got invited by that person? Especially for the print out. Anyways.... just another useless feature that doesn't really have a point to it except getting jammers to play. 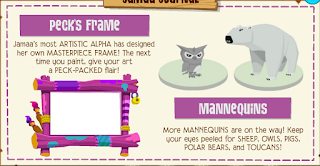 A peck frame has been added as well as more mannequins are coming soon. 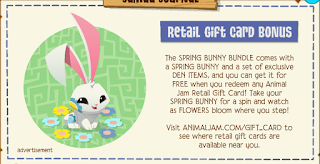 Spring bunny deal is back. 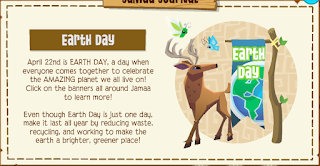 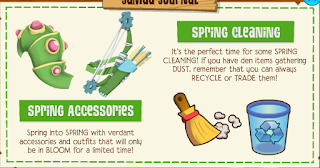 Spring accessories are back for a limited time and a pointless reminder than you can recycle and trade unwanted items. 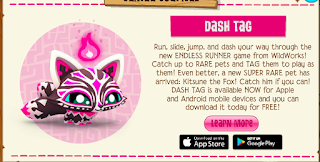 Also a reminder for dashtag.

(btw i kinda like the clydesdale horses better a bit than the sabertooths... don't judge me please!)

Thats all for today jammers!
See ya soon!! 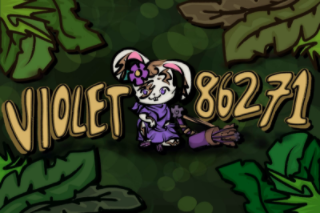