Hey jammers!
Sorry for not posting this past weekend. As I mentioned on Friday there was 99% chance that I there would not be a post considering I was going shopping with my friend for an hour before the movie which was saw which was DESPICABLE ME 3. It was pretty good incase you were wondering I would say some spoilers except who knows there may be some of you guys who are planning on seeing it and don't want spoilers... I also got some cute bracelets from Claires and they I noticed they had they adopt a pet igloos! Except I didn't check price due to the fact I was with my friend and ya... Though I checked it online and they were 8.50. Which you can get from toys  r us for 5.00 except next time I go to claires I will check... Unless I forgetXD Which will probably happen... And about yesterday's post I went outside to take some pictures and then kinda got carried away by trying to take a close up picture of a bird which didn't really work out.... But then yeah I probably could have posted after but then I decided to take a shower then it was supper and then after supper I decided to test out the animating program I got and it kinda confused me and the internet wasn't working at the time so that didn't help either then I watched youtube since I had fixed the internet!!
Then today I just watered plants in the heat which is actually soooooo exhausting but then after lunch my mom gave me a hat to wear and I think it helped with the heat a bit at least on my head. So I am here now!! This intro turned out much longer than expected and like I said before I am not even sure if any of you guys read the intro soooooooooo. Yeah!!

Let's get on with this post...
Daily Item:
Today we have the rare trident necklace sold in Bahari bargains for 900 gems! 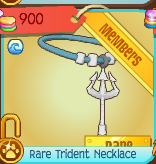 This is actually a nice item, even if it's recoloured. I like the colours they used for it today!
It is a bit pricey though and it should be like 700. 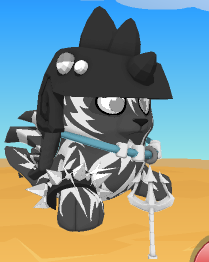 It doesn't really go well with black! But I am sure if your seal was blue or something it could:)

Rim Redo:
Like I said above, the colours for this rim I like so the redo won't have much of a change I guess you could say?
So here it is yall:

Weekly Edit:
Hmmm what shall this week's edit be???
I HAVE AN IDEA!!!
Introducing the newest and ugliest animal to jamaa...
THE BLOBFISH!

(Yeah, I could have spent a bit more time drawing him but the edit isn't suppose to be something that takes 5000 years to do:P)
Anyways.... For some of you who didn't know I love blobfish and have 2 stuffies of them ones big and is named Blobby and the other is smaller and is named Blobby Jr. Now this picture was originally going to be underwater but then I thought to myself, blobfish aren't actually blobby underwater they are only blobby when they come to land. (in the water they are like a normal fish) And yes this blobfish on aj does have fins but they are just hiding since I didn't draw them on!!

Anyways I hoped you enjoyed this week's possibly bad edit?!!

Howl Of the week:
Since I didn't get around to this yesterday...
Last week I asked...
When you first started playing AJ what were your initial thoughts about it?

The howl I chose is from Transions, here is what she said:
My initial thoughts were, "Omg, I'm going to get all my friends to play and we could like trade and chat and play games." My friends tried Animal Jam but then they discovered Social Media's I'm not too fond of. I almost quit but I'm glad that I continued because if I quit I wouldn't be able to meet wonderful people like you, Scooter, and so many amazing bloggers!

Im not sure if all of that was the whole howl but.... Oh well!

For next week's howl the question is...
Who do you look up to the most in AJ?

Box Monster's Blog:
Box monster has made a new post and would love if you guys could check it out!
He has some fan art and... OH WAIT? Did he just make his own aj account??? Yes he did:) Be sure to add him @BOXMONSTER71!

That's all for today jammers!
I feel like this post was kinda chilled like not very energetic.
Do you guys prefer Chill posts?
Anyways... See ya tomorrow!