Hey jammers!
Today I was very saddened to see that scooter was quitting animaljam and his blog forever.
So I decided to make a little dedication message to him in this post.
Anyways on the happier note I volunteered today at a tea party thing for adults I guess you could say. And when I was suppose to get like 3hrs and 30 mins of hours they gave me 7hrs since I did such a good job. :). And in my table I served my town's mayor!
Cool eh? Though she didn't really eat a lot of her food. Anyways... Let's get onto this post.

Daily Item:
Today we have the returning mechanical speaker sold in jam mart furniture for 500 gems! 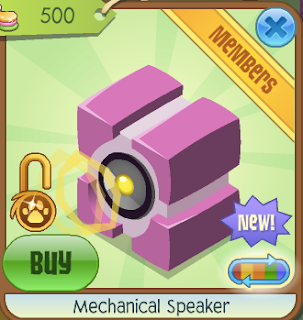 I actually kinda forgot about this item and that it existed whoops.
Thank You, Scooter:
About a bit more than 3 years ago, I found the animal jam sky blog. A blog that was run by Scooter, a jammer who loved to blog and play animal jam. He speedly became my inspiration. I would always read his posts and email him, we became best buddies on AJ, I guess you could say, his blog was so much fun! Then in August he announced he was quitting the game and his blog. I read that post and cried. I knew I could email him and keep in touch but it wouldn't be the same. Then it quieted down. Then in December 2016, a MIRACLE HAPPENED. Scooter came back to Jamaa and his blog! I was happy and so were some of his previous readers from before. The AJ sky blog continued to be as fun as it was before, with parties, Blu the monkey, and OF COURSE FASHION SHOWS. I was a lucky jammer in 2014 my pet was pet of the month. In 2017 I was jammer of the month as well. Then about a month ago he left a message saying Big announcement coming soon. This past week I had a feeling Scooter was quitting for a few reasons. Today, I woke up to check my blogs and to see what the announcement from Scooter was actually about. I was saddened to see that Scooter was quitting again. I had lived him quitting once, and now twice. I just wanted to say to you Scooter and I'm sure everyone in the sky community would say the same thing...
Thank you! Thank you for spending so many hours of yours to work on the blog. Thank you for making the AJ sky blog the best it could be. Thank you for being such a great inspiration for many jammers. Thank you for always being kind and always in a good mood. Thank you for everything.
Thank you for being such a big impact on part of my AJ life.
Whether you choose to quit temporarily or forever. Just remember...
We will miss you! Be sure to come visit Jamaa and your blog once in awhile.
I hope to talk to you again whether its 2 times a year or once a month.
The AJ sky blog will always be one of my favourite AJ blogs, and inspiration for my blog.
I hope you can continue to inspire many great people in the world.
You will always be remembered Scooter.
THANK YOU!

I don't usually do things like that for friends or bloggers when they quit.
But Scooter was one of those inspiring AJ bloggers that came back to blog even after saying he wouldn't. There's probably so many things I forgot to say in that but it's the thought that countsXD
Anyways let's get onto this howl...
Howl of The Week:
Last week I asked...
When you first started playing AJ what were your initial thoughts about it?

Unfortunately no one commented down for this.
So... You have this week to comment down your howl.

BE SURE TO COMMENT DOWN YOUR THOUGHTS FOR NEXT WEEK'S HOWL!!

Thats all for today jammers!
See ya tomorrow!!

Email ThisBlogThis!Share to TwitterShare to FacebookShare to Pinterest
Labels: daily item, Howl of the week