Hey jammers!
Sorry if yesterdays post seemed rushed and horrible I just wasn't in the greatest mood.
Anyways I may be seeing Jurrasic World tonight cause my parents are seeing Terminator and I wanna see Jurassic and they are at like the same time so I might just be seeing it. Plus they are like the same lengths too.

Today we have the new rainbow arch sold in the cloud party for 750 gems! 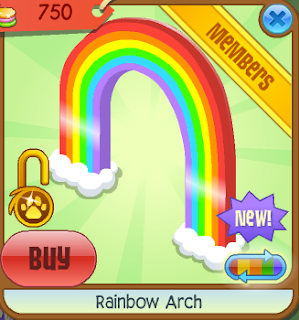 This actually looks like a rainbow just a bit more curved if it was less curved then it would look identical to a rainbow. Random den idea right now!: Get this item and put it in the sky of any den then it will look like an actual rainbow in the sky. Hehe:) 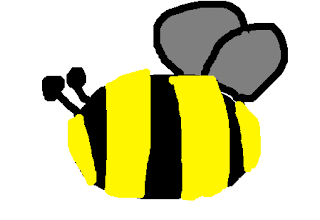 Its a little baby bumble bee I drew.
Isn't it cute? Ikr it has no eyes at all! :O NO EYES?!?!
Oh well did you know that bumble bees don't actually sting?

Exactly. Ajhq changed this last summer.
Now only members can have free chat. I don't know why they changed this.
Now that its a member only feature its stupid.
I DONT LIKE. The only nonmembers that can have it are the ones who changed it to free chat before they made it only for members only. So thats like 30% of all jamaa.
Comment why you think they did this.
Was it because they wanted it to be just member?

Randomness
Once there was a llama named Earl.
Earl was very slow like a snail UNTIL ONE DAY SOMETHING AWESOME HAPPENED! 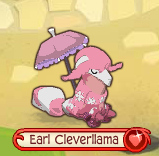 Earl took a nap. Later on that day Earl woke up and started eating mushrooms.
SHe didn't know they were mushrooms she thought they were carrots.
So she kept eating them and eating them until SHE WENT SUPER FAST!
VROOOOOOOOOOOM.
The end!
Do you like my llamas look?

Thats all for today jammers!
See ya tomorrow!
-VIOLET WHO REALLY NEEDS TO GET HER SIGNATURE BACK ON HERE...