Hey jammers!
I was gonna do the second part to the least visited places in jamaa but you know of course my internet HAS to be acting really stupid right now and slow so that isn't happening:/
Guess you will just have to wait for who knows how long now.... Sorry about that.
If you guys know the music artist/rapper Macklemore he released a song called Glorious and it was for his Grandma's 100th birthday since she was turning 100 years old. The music video and song is really AMAZING. Especially the video cause it's him and his Grandma.
So yeah.... Oh I also got a small sketchbook for like drawing game art in it cause I don't really want my game art in my normal sketchbook. I ordered a magazine and it still hasn't come at all this month and it's suppose to come every 2 months since its 6 issues right and my mom called them sometime in may and asked and they said it should come in June. Cause what almost half way through July it hasn't came:/

Daily Item:
Today we have the new gem chest of gems sold in jam mart furniture for 600 gems!! 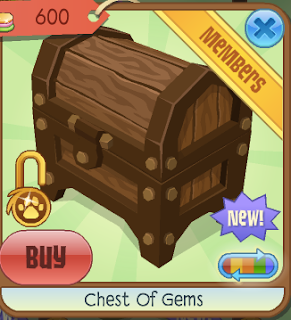 Im not really sure if this is  new or old item so I am just classing it as newXD The outside of it though actually looks quite realistic.
Mini Challenge:
For this week's mini challenge I wasn't really sure what to do again, just being honest so I am going to do riddles again like last week.
This week's riddles are from riddles.com
Here they are:

Ja's Tag:
Today I got tagged by Lost to do a tag which called Ja's tag since I am guessing ja created it?
Anyways... Let's get answering these questions!!
I feel like half of them Im not even gonna know what to say so be prepared...

1.What was a cringey moment on AJ?
Ummmmmm I don't know.

2. What was a sad moment on AJ?
When my buddy carrot told me something I promised not to tell anyone so I can't say.
And when Scooter left the AJ sky blog back in 2014 and when other people left their blogs like Mel. Also when a few of my buddies decided to quit:(

3. What was a funny moment?
There has been a lot of funny moments but I honestly can't think of any right now. Except when Flora said on the hangouts "Let's explore the wooooooorld. That sounded weirdXD"

5. What was a frustrating time?
So the other year I would always go say hi to two of my buddies except they were always roleplaying and always said they were busy and technically in a way asked me to go so they could roleplay. And then they came to my den and said they didn't want to be my buddy anymore cause they felt that I had changed and stuff and so they unbuddied me:( But then I think sometime last year I buddied one back not that she plays AJ much anymore. I honestly don't even know if she still is my buddy. Oh another frustrating time was being on the Scam Watcher's Society, I could seriously spend like a quarter or a third of a post ranting on about that.

6. What was a scary time?
When I found out about fman and when there was a site that said I could get free rares or something so I entered my username and password and then gave it to them. Then after quickly searched that it was a hacking site so I quickly changed my passwordXD

7. What was a disturbing time?
Ummmmmmm I actually can't really think of one.

Sorry if i forgot someone...

Thats all for today jammers!
See ya tomorrow!!
DON'T FORGET TO COMMENT DOWN YOUR HOWL IN THE PREVIOUS POST.
- Violet