Jamaalidays in July Wild Weekend and My New Animal Outfits

Hey jammers!!
Back here for another post. I feel like I haven't really posted as much as I wanted to this summer, but I guess its better than before. Hopefully in August, I can start to post more interesting things besides updates and that stuff. Anyways, today I actually had a pretty good day and im happy:) Volunteered then planted some stuff that needed to be planted XD Then 3doodled  then read some of Twilight.
So yeah its been a good day. Now writing a blog post:)

Yesterday we received an okay update. It wasn't the best in my opinion but it's okay. 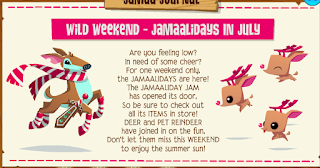 First up we have the wild weekend, which is Jamaalidays in July! Speaking of which, we never got Jamaalidays in July did we this year? Or was it there near the beginning of the month? Anyways, now we get it now!! Make sure to stock up on all these jamaaliday items because, I don't know why you want to celebrate Jamaalidays/Christmas Holidays in the summer, but you know. You do you:) 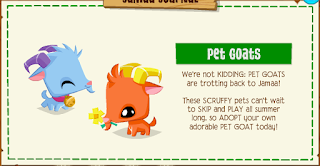 Pet goats are back! I vaguely remember these and they are really cute! I wish they were nonmember but unfortunately they are not. 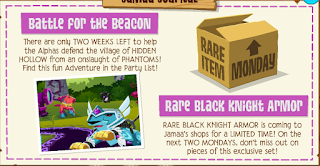 Battle for the beacon is leaving. I never really played this adventure much within the course of it's overall arrival in the game. Now we are getting rare black night armour coming to the shops for a limited time. I wonder how many items of these will be nonmember? It better not be the recoloured knight armour. But how much do you guys want to bet it is? If I can't get it, can someone buy it for me :D I probably won't be on Monday so.... 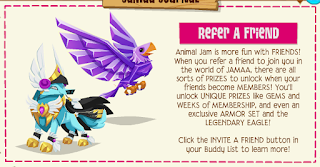 A reminder about plushies and toys.
Thanks for that reminder, I do like the plushies and actually completely forgot about the toys until now.

Well there you have it! The new update!!

New Outfits:
The other day when I was on AJ, I decided it was time to change my animals outfits. So I thought I could post theme here:)

First one up is the pig:

I decided to go with the colour pink! I actually love this new outfit design.

Second one is my seal:

I decided to go with blue and wear my moon hat that I received from the code Apollo11.

Which one do you guys prefer better?
Personally I like my pig's outfit better:)

I miss my bunny though:( AJ we need more animal slots for nonmembers! Atleast 3 at the least but 5 at the most (actually more would be nice since members get 1000)

That's all for today jammers!
See you soon:)