Hey jammers!
How are you all doing this fine sunday evening?
Well for starters my Friday was actually pretty good. I didn't have to volunteer which was nice though I have to next week. I read today, read my magazine, did a little organizing in my room finished the art commissions for Transions. (Gotta make sure I post those tomorrow or sunday XD) Then I coloured a bit in my adult colouring book. I must admit, colouring is a good stress reliever, like people say it. So yeah, basically a pretty productive day for me at least:D
I'd love to hear what you jammers have done today in the comments.
Also, so on blogger there is a feature that shows pictures from this blog that you can add back and there is a specific section for that so today it turns out all of that was removed, it still is in the google album archives though which is nice:D But on the  bright side, though blogger actually let me copy and paste an image from the web or whatever without needing to insert it as a link. Which is great:D

Anyways, let's get on with yesterday's update, shall we? 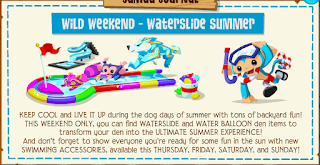 First off we have this weekends wild weekend:D It is waterslide summer themed. So you can basically make a waterpark I guess. Remember when I said they should add a waterpark party or items or something? I wonder if they got that idea from this? Ill give more feedback on these items later in the post when I show the items! 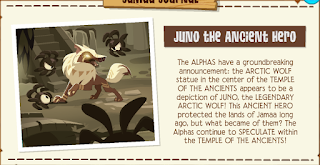 The stone seemed to be a new alpha apparently non binary. Although I am not exactly sure what non binary means... XD Well here go, we have another hero to add to AJ's collection!! 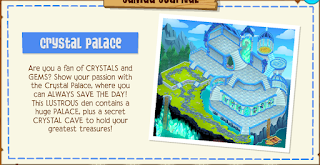 The crystal palace has returned. The den actually doesn't look that big from the picture. 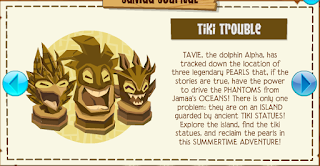 Tiki trouble is back as well. It was apparently getting lots of demands to bring it back. I remember playing this adventure actually and feeling kinda frustrated trying to find all the stuff. It'd be nice if all these seasonal adventures stayed in one spot all the time and never left. I feel like that would give jammers more stuff to do... 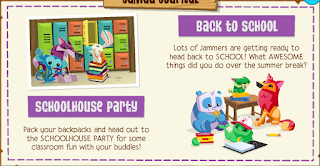 The school house party is back. (all the items are member except nonmembers which get the globe of the earth...) Reminder about back to school. I don't need all these back to school reminders, I still have like a month left AJ XD 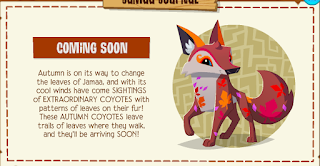 A new coyote is coming known as the autumn coyote. This should be cool to see with the patterns. The picture actually makes it look kinda pretty.

Here are the wild weekend items: 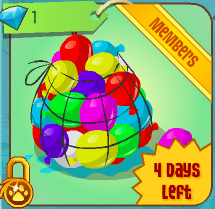 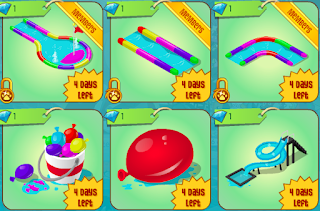 I like these items and I am happy that almost half of them are nonmembers. But how come the nonmembers don't get any of the water slide items? Like how do you except nonmembers to make their own water slides if they don't have the items. AJ you could have at least given us a boring one or just the straight one so we could make our own waterslides.

It'd be cool if one day we could interact with the items. I bet you lots of jammers would be interested in that. I know I would be:D

Message about AJ(read please, its a bit important):
Recently within the past few days to weeks I have noticed that youtubers and aj bloggers mainly aj bloggers though have been starting to lose interest in the game because it is starting to get boring because not much new content is added to the game like stuff to do and the updates are apparently boring. They are also deciding whether or not to blog anymore. I am not being specific with anyone here I am just saying in general.

My opinion about the game and what is happening:
I have noticed that the game is starting to get boring. I am not going to say 100% boring because that is not true. AJ isn't adding as much content as they used too. Well actually not any at all really with things to do that are new and aren't just returning every year. I do agree that the population is starting to die down and AJ is starting to lose it's spark. I have noticed less people in the lands. Maybe this is because the older generations are losing interest, probably due to the content reason or because as you get older you usually start to get more priorities, and school gets harder making you less busier. Though I must admit there is younger people still joining the game. Im sure there is A TON of people out there feeling the same way as some of us bloggers are or are the same age bracket as most of us playing the game that are 12-13 years+. In fact I can guarantee you that.
But back to the content. I haven't been finding the jamaa journals super bad, maybe because I don't care for them as much as I used,  I mean they still do give me a little bit of excitement to see what is coming in store. But when has there actually been good updates in awhile? Not for the past few years. But usually when we do get bad updates we do get a good update eventually. There will be a light to this tunnel eventually some day this year. Maybe this year AJHQ wanted to focus on the lore of the game more than actual content because there hasn't been much lore added recently.

Come on though we can't say we get super bored of the game though because we just don't do all the opportunities the game has to offer. Most of us usually go to make masterpieces. But when was the last time a den was decorated? Or an animal? How about playing an adventure? or what about a game? Trading? Making masterpieces? Roleplaying? Exploring the lands? Making gems? It does get boring doing those after so many years, but maybe once we do those things again that we haven't done in awhile the game will be more fun!! Also most of bloggers are on the google hangouts for the bloggers so there is no need to go on AJ to talk to many buddies since that is a key thing that some of go on to do.

Im not sure guys but I am sure there will be a good content feature coming this year.
I still enjoy playing animal jam even if I have been playing it for the past 5 years. I must admit it does get kinda boring at times with nothing to do but, just because of that doesn't mean I am going to quit blogging and playing the game because it bores me sometimes. Yes there is other things I enjoy doing in life instead sometimes. Maybe, I still enjoy this game because its a game I fell in love with the first day I played it or because this past year I had high school and only got time to go on it a few times a week. I don't exactly do all those activities I mentioned above earlier but it is fun to do once in awhile.

Anyways, I guess what I am trying to rant on about here is that just because there isn't new content and stuff being added doesn't mean you have to quit the game entirely or blogging. Like I said before, how often do we actually get awesome updates? Not often and when we do everyone gets excited all over again.

Don't worry I don't plan on leaving anytime soon. Even if I did leave it would not be a definite good bye I would still come post to say hi every few months or whatever, i don't wanna think that far because it always makes me sad thinking about that stuff so yeah...

I don't really know what I am trying to point out here but yeah. If you made it this far into the rant I congratulate you:D

Also the challenge doesn't officially start until everyone has entered! I would like atleast 3 people to enter this challenge if they can:D

Well thats all for today jammers!!
See ya soon:)
- Violet
(Be prepared for a new signature tomorrow:D)