The Return of a Great Update!

Hey jammers!
Welcome back:)
(why must I keep saying welcome back lately? Oh well XD Guess I will just roll with it lol)
Since its the long May weekend, I have 4 days off. Though within those 4 days I have spend part of it studying for a science test because, its on Wednesday next week and I won't have time to study Tuesday night because of dance. So I have to do like all the studying this weekend. So today I am gonna do like all the review. Then tomorrow start to study the review and so on and yeah. But then I have to study all the notes, cause we don't get a proper review with all the stuff on it. Though we better for the exam or else....  not gonna say cause don't wanna jinx it. Other than I hope to draw, read(finish a book hopefully), practise the flute, and post on here hopefully more than once! Plus make another bracelet and do a few other things.
Hoping I have enough time! I wanted to hang out with my friends this weekend but I feel like I won't have enough time. Perhaps it will have to happen another weekend. Also as of next Tuesday there is one month till exams so thats not great:( Oh well! Once exams are done though there is 2 months of summer vacation, which is greattttttt!
Okay I should probably stop rambling about pointless stuff you guys don't care about XD

Okay, I technically should be working on my science review right now. But I thought I could squeeze in a post:D

Jamaa Journal:
Since yesterday we received a brand new update which was actually pretty good, I thought I would get ahead of the game and actually post it today instead of posting it tomorrow or later this weekend, or not even at all.

So for those who haven't seen it, or have lets check it out either way! 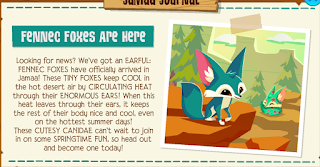 Fennec foxes have officially arrived! Even if they are an edit of the arctic foxes I still find them adorably cute. Though I don't get why there ears are so floppy XD I wish I had one cause they are super cute:) 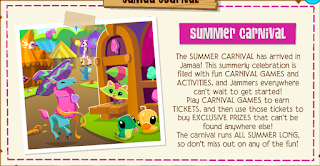 The summer carnival has arrived back!
I hope a new game comes out this year or new prizes that would be awesome:D
Either way I do have fun playing all those games and collecting tickets and all that stuff. 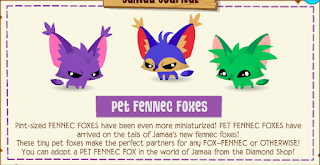 Pet fennec foxes have arrived! I always love when theres the animal and then the pet of the animal. Cause its then like a mini version of your actual animal:D 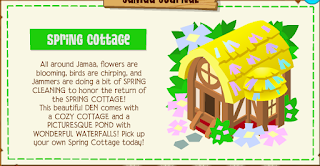 The spring cottage is back! I love this den as well.
I hope they add a spring small den for non members like they did for fall and winter. Perhaps that will be the next update. 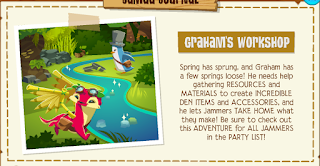 Graham's workshop is also back! I love this adventure also. Though I don't really play seasonal adventures much anymore. Or adventures in general unless I wanna make gems and don't know what games to play. AJ should add some new games also. 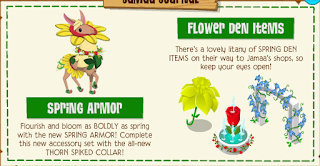 Spring armour is here! I'm not sure if we had that armour last year. I feel like we didn't. I guess now everyone can be a flower of some sort XD Ooooh flower den items coming! I can't wait for these also. Hopefully a lot of them are nonmember cause the examples shown are so prettyyyy. 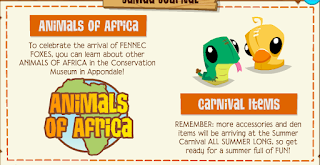 The Animals of Africa is back! Im happy AJ brought this back, it just adds another educational touch to the game. Perhaps one of the few educational factors we only have left.
Also we have a reminder about the carnival items. Let's hope we get some cool new additions! 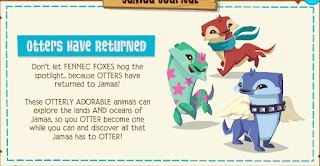 Finally otter's have returned!
Make sure to pick up these otters:) Im sure they would really appreciate it XD

Thats all for the update! I must admit this update was actually pretty good. Even though some of the stuff was returning, it wasn't short and crappy. It also brought back lots of stuff and brought a few new things too! Just like how the updates used to be. Maybe this update will be the start to the comeback of good updates! Or maybe not. Let's hope updates will be just as a good as the one from yesterday. For now we shall wait and see.