Which AJ toy is your favourite?

Hey jammers!
Wow, it has already been one week since I posted last? Boy does time fly by fast!
Okay before we start this post... I am gonna give you guys a bit of a life update like I usually do except since its been a week this update might be kinda long like it sometimes is soooo.
Anyways..... As many of you guys know or now know as I write this, I am a big fan of the maze runner series. The last movie in the trilogy is to be released January, 26 2018. This movie is known as the death cure and earlier this week... THEY ANNOUNCED THE TRAILER WOULD BE COMING SOON, and posted a few pictures from scenes of the movie. Then a few days later... THEY ANNOUNCED IT WOULD BE DEBUTED, at the end of the teen wolf series finale. Except when that happens I won't be watching the tv, so I will watch it tomorrow! Anyways I am super excited cause I have been waiting for this to come out for ages and so has the rest of the TMR fandom! So yeah. Also for those of you who don't know I am a fan of Hedley which is a band and they are releasing their new album, cageless next Friday the 29th. So eeveryday, they are releasing a short clip from a song of theirs. And the songs so far have been pretty good. I swear they just keep getting better and better. AND THIS WEEK THIS RECENTLY ANNOUNCED TOUR DATES AND MY SISTER AND I PLAN ON GOING CAUSE I HAVE BEEN WANTING TO GO FOR A WHILE NOW. Next saturday the 30th I am volunteering all day and now my sister and I are going there early to help set upXD This week when I had a math quiz I thought I was gonna do bad but then I ended up getting perfect. I was very surprised! I hope I have more time to go on the computer this week cause I wanna post more and work on the sidegraphics more but I can't if I have homework and other things to do. I also had dance this week, and so my lyrical class was fun, cause lyrical was fun but, everyone else in the class is in grade 6 except for one girl who is in grade 7 and I am like 3 years older than all of them.... So yeah. Let's get onto the post today cause this intro is already to longXDDDDDDD Oh I also got ios11 this week and its really good! And its even better cause lots of changes were coming to IPad which is what I have:D

Daily Item:
Today we have the new fall shrub sold in jam mart furniture for 300 gems! 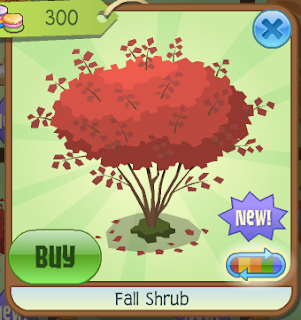 Also my apologies if this isn't the new item.
This is actually a very nice item! I like a lot:D And its also nonmember and a nice price!!

I just realized that I have like a month left of my membership and I haven't made the theatre den that I wanted toDX I also have barely redesigned any dens:( Well I will probably get another membership.
Howl Of The Week:
Last week I asked...
What is your favourite pet and animal, why?

Unfortunately no one commented any howls for it! So you can comment down your howls in this post again:D I hope to see your howls!!

Poll Results:
So today I decided to post the poll results from the most recent poll we had, asking what was everyones favourite animal jam toy so far.
Here are the results: 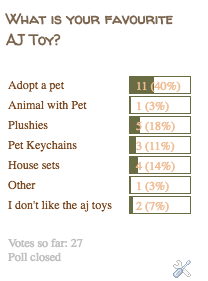 Okay so the most favourited toy was the Adopt a Pet, with 11 votes. I must say I like those the best too. They are nice to collect!! And then the least favourited thing was the animal with a pet figure.

I will add a new poll or polls shortly after this post is done!

Thats all for today jammers!
I would have added something else to this post except I am not exactly sure what to post about right now. So, yeah! I hope you guys enjoyed reading this post!!
See ya!

Email ThisBlogThis!Share to TwitterShare to FacebookShare to Pinterest
Labels: daily item, Howl of the week, polls