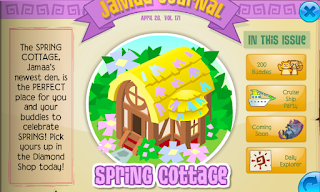 Okay to begin with we have the new spring cottage.
Personally I think its a bit big and to much like the sky kingdom den but in a way its nice for people who like big dens? 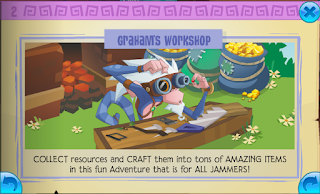 Graham's workshop has returned! I really like this adventure so its nice that its back. I don't actually think I ever got an item from here even if I did it was probably 1 small thing maybe they have new prizes this year but probably not. 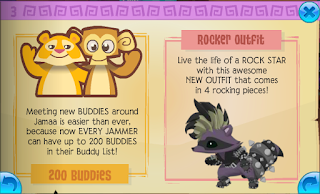 YAY WE CAN HAVE 200 BUDDIES NOW!
This is actually great now you won't have worry about buddies unless your  a person who adds like 1+ buddies a day XD That used to be meXD Oh and a new outfit which will probably be coming out pice by piece seeing thats what my buddy naffy said since she couldn't find them any where. 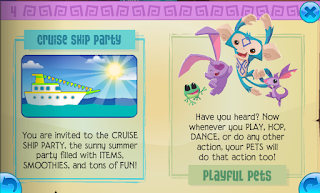 The cruise ship is back! Oh now when you do one of the following actions; Play, hop, dancer sleep your pet will do it with you. Thats actually kinda cute don't you think? Its actually kinda cool too, nice thinking AJ! 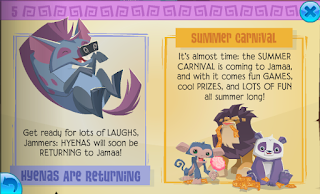 Hyenas are returning! Didn't they like just leave like 2 weeks ago or something? Or was that another animal? OH AND THE SUMMER CARNIVAL IS COMING BACK! YAY! 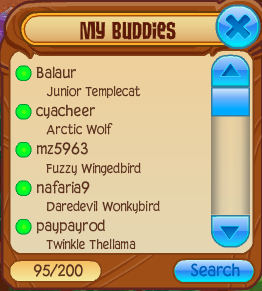 We also have a new feature to this update the way the buddies list looks.
Its gone extremely fatter and now you just have to hover your mouse on top at the side where there is a garbage bucket to delete your buddy instead of clicking on there player card!

Oh and for any of you guys who have been waiting to see a video from me I haven't had much time until this week when I realized I need to update iMovie which won't let you do nothing until you update it so... Yah hopefully my brother can update that soon:)
Thats all for today jammers!
See ya tomorrow!