Hey jammers!
Sorry for not posting a lot lately:( Ill try to have a post every day this week and maybe next week and on wednesdays to since I have break from dance! Well a post not on thursday because the time I post I probably won't be home cause I am seeing family. Then on christmas will probably be a small post with the jamaaliday gift and new item and merry christmas! I love waking up on christmas morning before everyone else is up, going to the living room and seeing all the presents and guessing what they are too! So we got new windows in my house so we had to move a few things in my room which was a mess after so I had to put some of those things back and it was a mess I threw out and put in a box of unwanted stuff like half of it and my dad wants my sis and I to clean our room so I'm cleaning the rest tomorrow which isn't really a lot but yah... I also have to wrap up presents to tomorrow cause my mom suggested I do that tomorrow. Also I was thinking of having a christmas party on aj but then I thought I won't really have time and it would be such a late notice that not everyone would see it and I like having notices about 5-7 days before the actually party. So I thought why not do a new years one! Except I don't know if we are going on a trip cause we might go up north to see my dad's cousins which we haven't seen in ages for probably around 5-7 days! So ya.....
Sorry for the long intro!
_______________________________________

Todays jamaaliday item which I forgot to take a pic of is the CANDY TIE! I already have some of these items which are repeats so I keep decliningXD

Soooooo.... Today we have the rare candy cane socks sold in jam mart clothing for 750 gems! 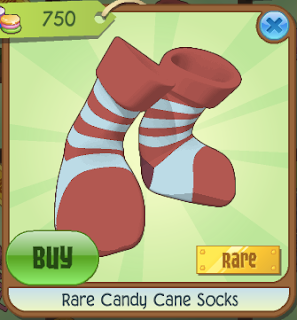 Well the colours don't exactly go together but I mean they are nonmember so YAY NONMEMBERS!!!!
I don't really like the colours though..... Oh well its nonmembers and thats all the counts right? 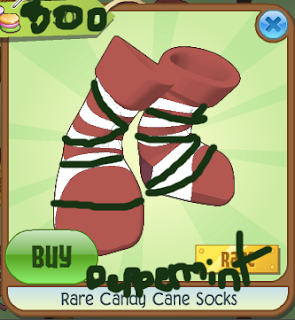 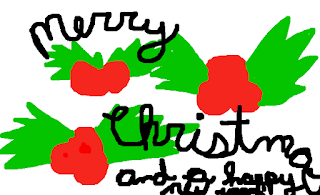 Thats all for today jammers!
Oh I've been obsessed with om nom lately. Like you know the small green monster from cut the rope! Well I realized they had an app so you could have your own pet om nom! So I got it even though it costed like 6 dollars!
See ya tomorrow!