Hey jammers!
I was reading snowyclaws post on Ajs today about the enchanted earth series.
Image credit goes the Ajs 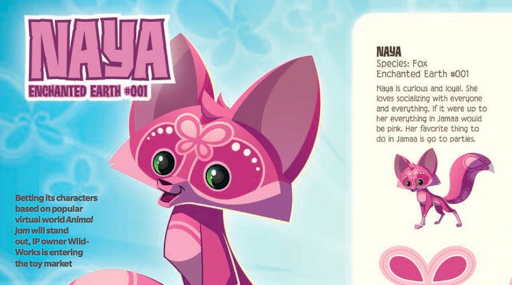 So there be a character about a fox named Naya.
She will be the first character in the series.
But look at this... This is what caught my attention though.
So this is just an article about the enchanted earth series.
What surprises me though is that it says it's for girls. Now saying that it's for girls isn't that a little bit unfair to boys? I guess there second series will be for boys? Unless the boys want to buy a girly series.
Ok now if you read the second paragraph on the right it says play wild will be released in June!!!!!!!
Yes finally!!! And I guess it does make sense for spring/summer then!
Now I just have to wait like a month-2 months to play!
Yesesssssssssss!
Thank you thank you!
That's all for today jammers!
-Violet
Posted by Violet AJ at 7:43 AM